Would you trade your house for one tulip bulb?

In the Dutch Republic from 1636-1637, traders called “florists” flocked to the smoky back rooms of taverns, drinking and exchanging scraps of paper promising bulbs.  One tulip bulb sold for 5200 guilders, over 20 times the annual earnings of a carpenter.  People named this flower frenzy “tulipomania”.

A pamphleteer writing in December 1636 described a tough purchasing decision: 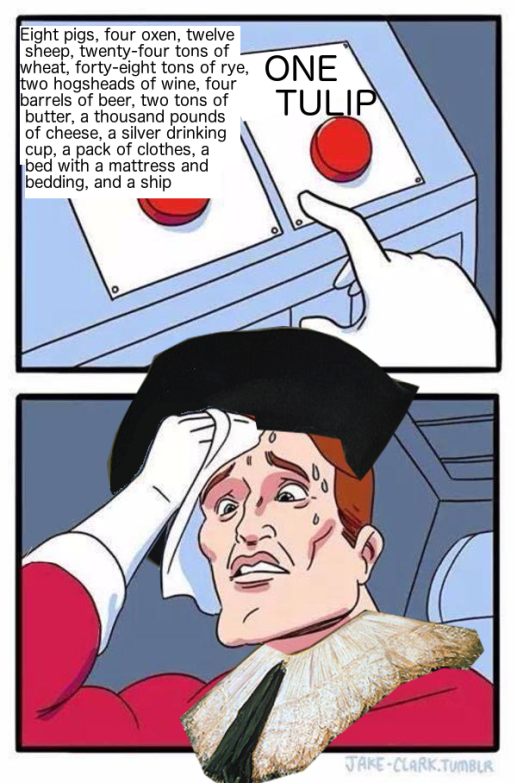 What made tulips so popular, and the coveted varieties so valuable and scarce?

Here’s how it worked.  There was a high demand for “broken” tulips.

Growers knew that flowers grown from seed were always unicolored, never broken.  So they sold bulb offsets instead, because the offsets of broken tulips would usually be broken too.  Here’s some footage of tulip bulbs growing offsets that become new tulip bulbs:

There were a few clues to the true nature of breaking.  Carolus Clusius, the best botanist of the time, wrote that broken tulip plants were smaller and weaker than unicolored tulips.

Tulip breaking virus causes some cells in the tulip to under-produce pigments called anthocyanins (the pigments that make fall leaves red).  The lack of anthocyanins in these cells allows other colors to show through, leading to awesome flame patterns*.

Because Dutch broken tulips were diseased and weakened, they produced fewer offsets than unicolored flowers.  This left tulip growers with only a few bulbs of their newest, most coveted varieties.  The virus that made the tulips so beautiful ensured the scarcity of those flowers!

As more and more artisans joined the market, prices rose and wine flowed in the back rooms of the taverns.  It seemed like the good times would last ~forever~.

Of course the ending was unexpected.

In February 1637, the tulip bubble burst and most bulb prices crashed to 1 percent or less of their peak values.  Within hours, the viral tulips were just diseased flowers.

However, the Dutch economy didn’t crash; most of the people who had invested in tulips were artisans, not powerful merchants and politicians.  So the country Kept Calm and Carried On.  The courts refused to hear many tulip-related cases; most were settled at a local level with the contracts being cancelled and the buyer paying only a small amount of the original price as a fee.

Nowadays, tulip breaking virus is seen as a menace that reduces yields.  Most ‘broken’-looking bulbs are exquisite fakes, the result of decades of careful breeding.

Broken tulips are now illegal in the Netherlands without special provision.

*The exact mechanism of how tulip breaking virus (TBV) interferes with anthocyanin pigment production is still a mystery!

One proposed explanation is that the virus causes RNA interference (RNAi).  In RNAi, small RNA molecules activate a targeted response that destroys a specific RNA.  (For a molecular explanation, see this post about tear-free RNAi onions.)  Broken tulips could be mounting an RNAi response to fight the virus, but hitting their own RNAs.

Interestingly-patterned flowers actually led to the discovery of the RNAi mechanism in the first place.  When a plant breeder over-expressed an enzyme in the anthocyanin synthesis pathway, he expected only darker-colored flowers, but ended up with stripy petunias.

Is RNAi the phenomenon that causes flower color breaking in tulips as well?  You be the judge!**

**Actually, don’t be the judge.  Fund scientists to figure it out.

Dash, Mike.  Tulipomania: The Story of the World’s Most Coveted Flower and the Extraordinary Passions It Aroused.  New York: Crown Publishers, 1999.