At the Stuttgart Aquarium during the 1970s, a team of scientists secretly and accidentally created one of the most monstrous plants this world has ever known.

Aquarists had taken innocent tropical algae and exposed them over and over to stress and cold.  Most of the algae died horribly.

That mutant, born into a cold and cruel world, was a strain of Caulerpa taxifolia.

The aquarium strain of Caulerpa taxifolia initially didn’t look sinister.  In fact, it seemed like the ideal saltwater aquarium plant: it was aesthetically pleasing, grew quickly, and reproduced asexually.  So the Stuttgart aquarists shipped their creation out from southwestern Germany to various aquariums around the world.

Tourists flocked to gawk at fish darting between the lush, bright green fronds of Caulerpa.  Little did they know that those fronds concealed a terrible secret.

Let us set the scene: The Oceanographic Museum of Monaco is one of the crown jewels of the tiny city-state on the French Riviera.  Perched among the limestone cliffs, the institute was built by Prince Albert I and was directed from 1957-1988 by the esteemed explorer Jacques Cousteau.  The Museum is a stopping point for the rich and famous between glamorous beach resorts, film festivals, and outings in flashy cars. 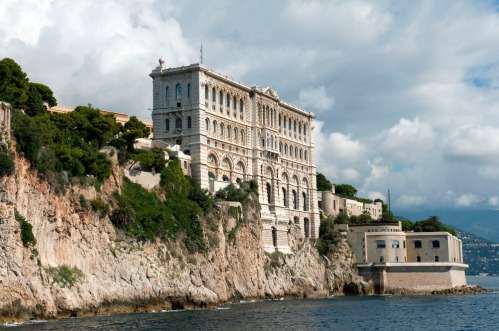 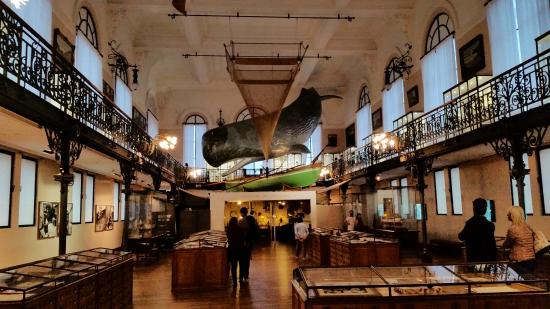 These rarified and well-funded halls stocked Caulerpa in their tanks beginning in 1982.

Just two years later, Dominique Bézard, a diver for the Oceanographic Museum, found Caulerpa taxifolia growing underneath the museum’s arched windows.  The algae covered only a square meter at the time.

The tiny patch must have seemed harmless, just another international tourist on Monaco’s shores.  That was a deadly mistake.  The freed seaweed prepared to exact its revenge on an unsuspecting sea.

Word of Caulerpa taxifolia‘s presence eventually spread to Alexandre Meinesz, a researcher at the Oceanographic Museum.  Having studied other related species of the order Caulerpales, he was curious to see if it survived the winter.

It did.  The unkillable, unsinkable plant slithered its rhizomes over acres of seafloor, putting up pinnules after pinnules, turning the ocean a bright green color evocative of radioactive sludge.   The tiny one-meter patch from 1984 had expanded to cover over 100 acres by 1989.  By 1990, the algae had spread to the coast of France.  Everywhere the algae went, it subsumed patches of native seagrasses and their marine communities, leaving only a monolithic bright green blob.

Alexandre, alarmed, called several local tabloids in 1990.  One ran an article: “Ecological incident on the coast.  The algae attack!”  The Oceanographic Museum, however, denied the dangers of the algae to the media, and the department of Maritime Affairs didn’t respond.

As Alexandre and his colleagues watched (and published papers) in horror, the algae spread outward from the glitzy coast of Monaco to the surrounding areas, creating dense green mats on the seafloor.

By 1992, the algae had spread to Italy and Spain; by 1995, Croatia; and by the turn of the century much of the Mediterranean had been invaded. 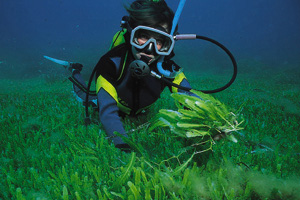 As Caulerpa expanded its rhizomes ever farther, scientists raced against time to unravel the mysteries of the monster.

What did they find?  And what exactly is so monstrous about Caulerpa?

First of all, Caulerpa taxifolia can grow at a daily rate of 8 cm, which is extremely fast for a plant.  It completely takes over Mediterranean ecosystems by replacing the native seagrass Posidonia oceanica, altering biogeochemistry, changing the community of invertebrates, and lowering fish biodiversity.

One of the main tools that Caulerpa uses is a toxin called caulerpenyne that disrupts calcium signaling.

Disturbingly, Caulerpa is also a cannibal!  It can absorb dissolved organic carbon from dead and decaying Caulerpa plants and use it to grow bigger and stronger.

So can you just chop it up to destroy it?  Unfortunately, Caulerpa taxifolia is like the mythical hydra but worse.  Every time you cut up a specimen, a whole new alga grows from each severed part!

However, dear reader, you haven’t heard the most monstrous detail yet.  (I shudder to think of it, but the world must know the truth!)

Each Caulerpa taxifolia plant has only one cell!!!

As you know, humans, plants, and most other macroscopic organisms are made up of millions and millions of cells.  Your [presumably human or zombie] body contains around  37,200,000,000,000 cells.  That’s 37 trillion.  Plant cell number varies, but most plants also have billions or trillions of microscopic cells.

Caulerpa taxifolia, on the other hand, is a “coenocyte”: one single cell with many, many nuclei.

That’s right, the whole plant is one single cell.

Generally, plant cells come together into different types of tissues (like xylem or phloem) that together form plant organs (like leaves). In short: cells form tissues form organs.  So what if there’s only one cell?  How does Caulerpa taxifolia still have functional organs?

Some brave molecular morphologists ground up different parts of Caulerpa and sequenced the RNA in each part.

Each region of Caulerpa taxifolia contained different RNAs; the apex had an especially unique signature.  That would explain why different parts of the plant contain different proteins and can therefore take on unique forms and functions, despite the fact that there are no membranes separating compartments.  The researchers compared their results to a tomato; the same types of RNAs in the photosynthetic part of a tomato (the leaves) were present in the photosynthetic parts of Caulerpa (the pinnules and rachis)!

Is there any defense against giant invasive one-celled mutant toxic killer seaweed? Or are we all doomed?

In 2000, Caulerpa taxifolia was discovered in the Agua Hedionda Lagoon in Carlsbad, California, near San Diego.  About 11,500 square feet of toxic plants lurked in the deeps. But this time, scientists and the government were prepared.

Working quickly, they hatched a plan to cover the infested areas with tarps and pump chlorine underneath to kill the seaweed.  $4 million and several years later, they declared victory.  All of the Caulerpa had succumbed to the chlorine.  At last, someone had defeated the beast!

So now we know how to fight Caulerpa, at least on a small scale.  And it is an officially recognized threat: Caulerpa taxifolia is on the International Union for Conservation of Nature’s list of the world’s 100 worst invasive species.  In the US, its importation, interstate sale, and transport is prohibited under the Federal Noxious Weed Act.

However, the fight isn’t over yet.  Caulerpa taxifolia‘s evil twin, Caulerpa racemosa, has also invaded the Mediterranean.

And Caulerpa taxifolia continues to spread all over the world, on boats, in ballast, when people empty their fishtanks… 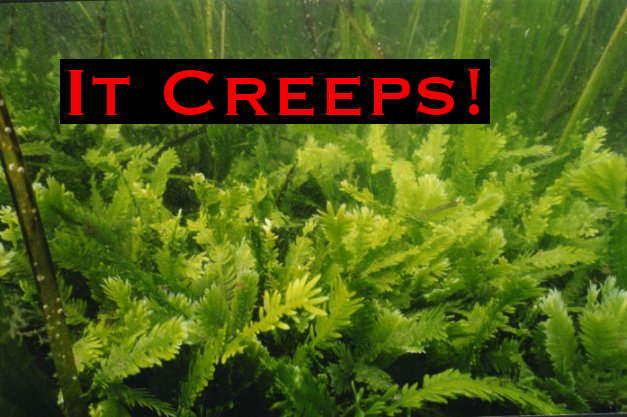 Or else your seagrass will be dead!

*While the single-celled nature of invasive Caulerpa taxifolia may be monstrous, it’s also fascinating for plant biologists who study the development of multicellular plants.  If Caulerpa doesn’t require separate cells to make a plant body, perhaps cell division is less important to plant development than previously thought.